We have updated Neural Network Console Windows. We would like to introduce new functionalities and their usages in this post.

Cloud version has already been able to export to and download as ONNX, NNP, NNB files, and now Windows version is also able to export to these formats.
Setting export format can be done by right-button clicking on training results and executing Export from the menu.

ONNX is an open file format for deep learning models, and a large number of deep learning frameworks/libraries released from various companies are compatible with it.

By exporting to ONNX file format, it is now possible to reuse the model trained on Neural Network Console Windows in other deep learning frameworks, or to implement high-speed inference by using optimized inference environments from chip vendors.

NNP is a file format Neural Network Libraries, an open-source deep learning framework available on GitHub that can be used with Python or C++. 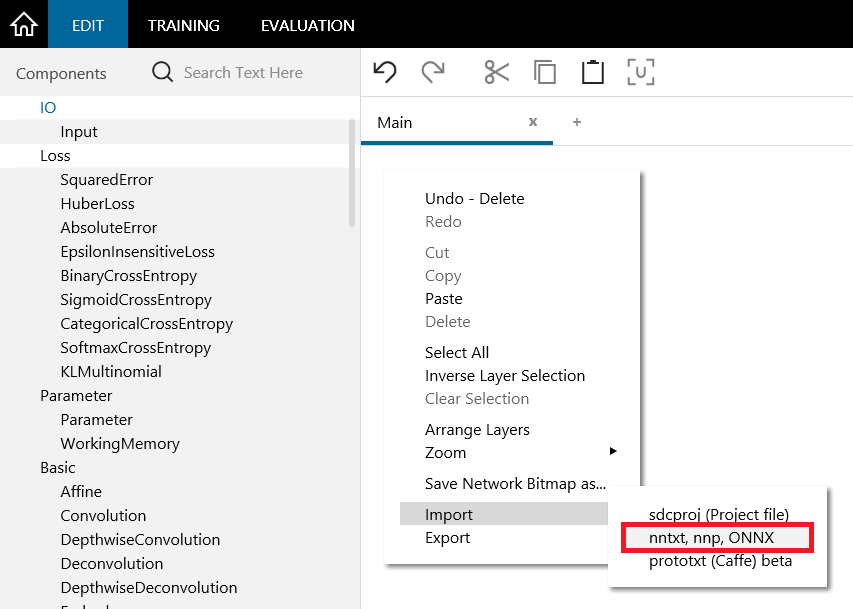 Users can now load ONNX and NNP files on GUI with learned coefficients, and reuse them. Import setting can be performed by right-button clicking EDIT tab and executing Import from the menu.

NVIDIA GPUs from Pascal and later generations support computations with 16-bit (half precision, fp 16, half format) floating points. With these GPUs, users can implement mixed-precision training by simply converting Precision item from Float to Half on Global Config of the project.

Mixed-Precision training has the following merits:
・Since the memory size for parameters and the buffer can be suppressed by half, larger neural networks can be trained within limited GPU memory.
・When training with maximum GPU memory, batch size can be doubled, improving computational efficiency (training speed). Furthermore, training speed can be improved with Tensor Core available on GPUs from Volta and later generations

While mixed-precision training can potentially lead to performance degradation due to less precise computation, it has been shown that using loss scaling can avoid such problem in most cases.
http://docs.nvidia.com/deeplearning/sdk/mixed-precision-training/index.html

In Neural Network Console, loss scaling can be implemented easily via multiplying the loss by a scale by adding MulScalar layer after loss function, and setting learning rate as 1 / scalar. 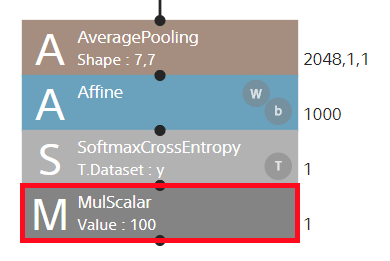 ※Mixed-precision training can fully exhibit its efficiency when the target neural network is a large one that takes up the maximum GPU memory. Note that, for small networks in most of the sample projects, or when the training data are too large compared to computational capacity (taking time to load the data), the effect of high-speed training may not be shown explicitly.

We will continue to improve Neural Network Console, and we are also looking forward to getting feedbacks from the users, so that we can make proper improvements quickly!